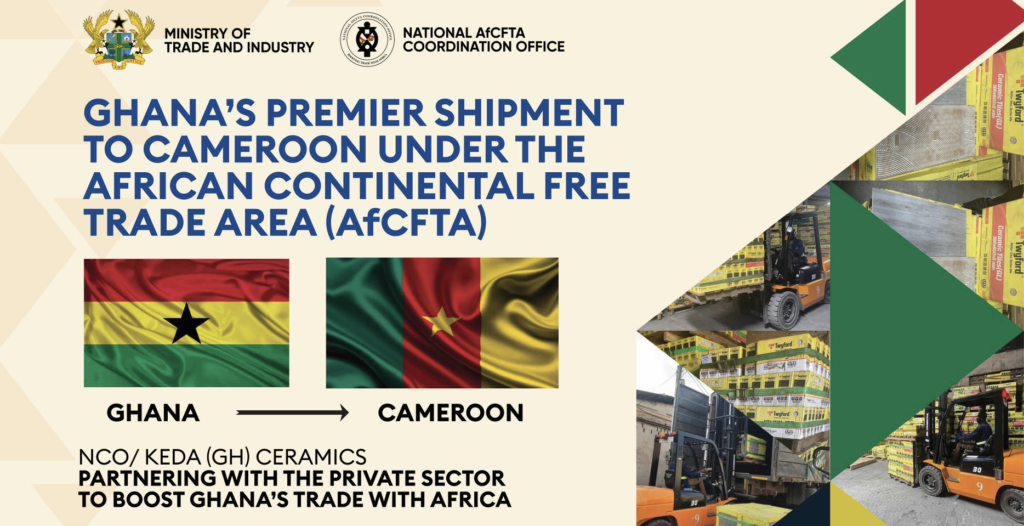 In the same vein, the Customs Division of the Ghana Revenue Authority (GRA) has received the first consignment of goods under the initiative from Rwanda, with delivery already done. The Assistant Commissioner of Customs in charge of the AfCFTA Secretariat, F.Y. Akoto, who made this known in an interview with the Daily Graphic in Accra yesterday, said on September 30, this year, the Customs Division issued the certificate of trading to a tiles manufacturing company, Keda Ghana Ceramics Company Limited, located at Shama in the Western Region, to export a consignment of its products to Cameroun.

“It is expected that when the products reach Cameroun, their customs officials will give the necessary preferential treatment to Keda Ceramics for it to enjoy reduced tariffs and quota-free facility,” he said.

On the imports from Rwanda, he said they were made up of coffee products which were received at the Kotoka International Airport (KIA). “Ghana Customs processed the Bill of Entry on the consignment, granting the importer the necessary tariff cuts after he had satisfied all the documentary requirements,” he said. Mr Akoto added that a second consignment of tea products from Rwanda arrived at the KIA yesterday and documents on the goods were being processed for possible delivery, possibly before the close of work yesterday.

He further indicated that a second Ghana-based company, the Benso Oil Palm Plantation (BOPP) at Adum Banso, also in the Western Region, was expected to export palm kernel oil to Kenya in due course.

“This means that the AfCFTA agreement has come into full force and our manufacturers can take advantage of it to export to other countries,” he added.

Under the initiative, the AfCFTA Secretariat will assist the countries to test AfCFTA trading documents and procedures on pre-selected shipments of goods among the countries.

It will guide shipments through customs clearance, including reduced tariff treatment under the AfCFTA in the receiving countries. Explaining why Keda Ceramics, a Chinese-owned company, benefited from the agreement, the Customs officer said Keda, per its production process, qualified under the rules.

“Under the rules, a foreign company operating in an African country that has signed on to the AfCFTA agreement qualifies to participate in the trading if the raw materials for its production are sourced locally. “In the case of Keda Ceramics, we visited the factory for inspection and realised that 99.97 per cent of its raw materials are internally acquired, so it qualifies to trade under the agreement,” he said.

Mr Akoto pointed out that AfCFTA was not set up solely for Africans, saying: “Once you set up in Africa and qualify under the rules, you are free to trade.” He, therefore, encouraged foreign companies operating in the country to work towards benefitting from the agreement. Allowing foreign-operated companies to participate in the trading activities if they fulfilled the requirements set out under the AfCFTA agreement would also improve foreign direct investments (FDIs) into Africa, he said.

FDIs into African countries hit a record $83 billion in 2021, according to the United Nations Conference on Trade and Development’s (UNCTAD’s) World Investment Report 2022.

Emphasising Ghana’s readiness for the take-off of the AfCFTA, the Customs officer said: “We have the structures in place for an effective take-off.” “The Ministry of Trade and Industry, the Ghana Chamber of Commerce, the National AfCFTA Coordinating Office, the Customs Division of the GRA, together with the AfCFTA Secretariat, are helping the companies to meet the requirements. “The experiences gathered out of this will help streamline our processes for the smooth implementation of the policy,” he explained.

Mr Akoto said some challenges that had been identified were being addressed. “We have been helping local companies to go through the systems. Some of them have been saying although they hear about free trade in Africa, they don’t believe it, so we need to educate them on what it takes to benefit from the free trade agreement,” he said.

Let's get in touch

Give us a call or drop by anytime, we endeavour to answer all enquiries within 24 hours on business days.

Give us a call or fill in the form below and we'll contact you. We endeavor to answer all inquiries within 24 hours on business days.
(233) 20 248 0378
info@afcftaghana.org